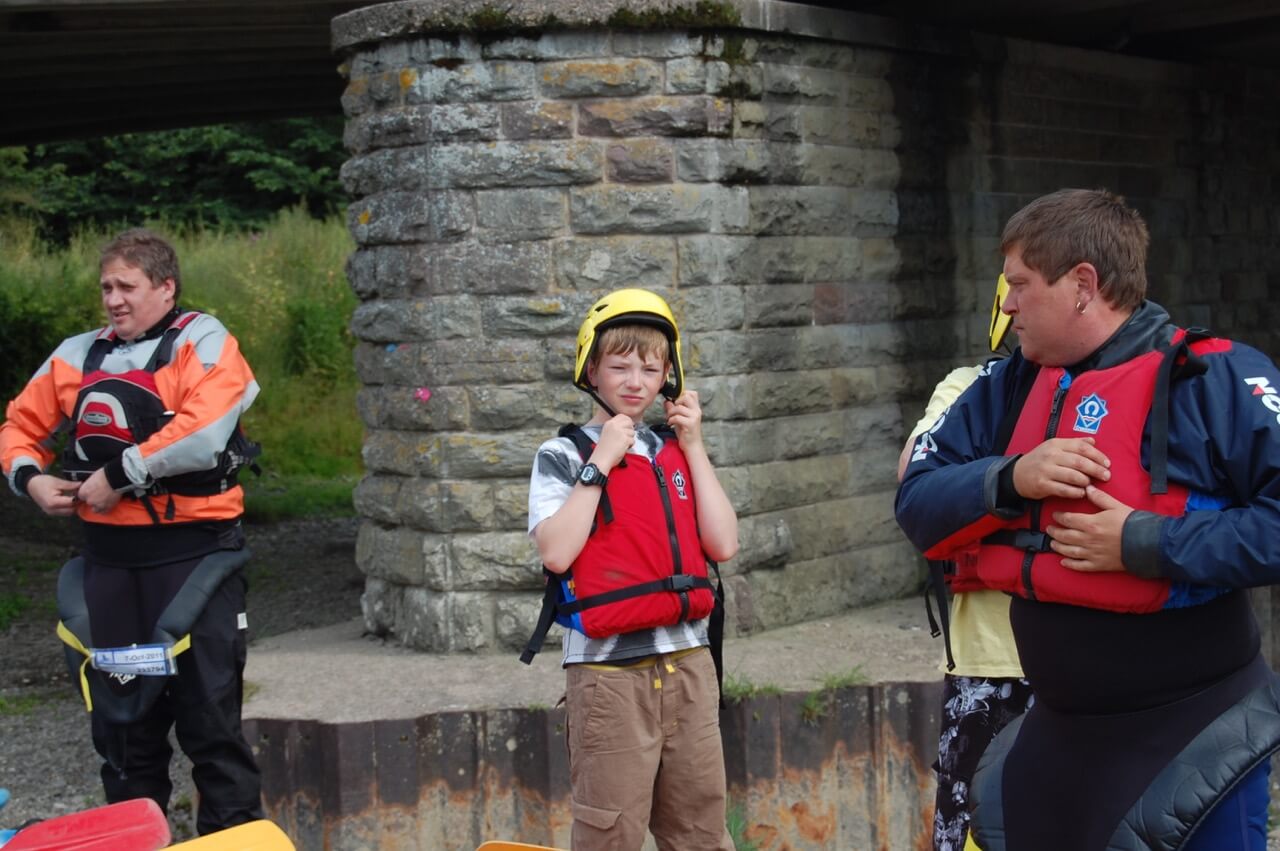 After lunch the Cubs were shown how to prepare their wood using an hand axe and  each team lit a fire. All of the Cubs cooked their own meal of Sausage, Beans and Potatoes on the fire.They even cooked the Leaders meals and the food was delicious and well cooked. After washing up and clearing away the Cubs enjoyed a good old fashioned camp fire , with a sing song, some silly stories, and a ghost story. After the Cubs had cooked marshmellows on the fire and drank loads of warming hot chocolate they turned in for the night in their tents

On Sunday morning the Cubs worked on their D.I.Y, badge and they each made an insect feeder out of wood and bamboo canes. After lunch the weekend was rounded off  with an exciting rifle shooting competition. During all of the activities the Cubs were very carefully supervised by experienced Leaders . It was a great weekend and all of the Cubs had a great weekend. Joseph tells us in his report on the weekend what he thought of the experience.

I had a great time at the Camp. It was also my first Cub camp. My Favourite activity was shooting, however my team didn’t win. Also my other favourite activity was collecting and chopping the wood for the fire. This was the first camping trip I have had for ages. I really enjoyed the Pink Gorilla story around the campfire! The camp was exhilarating , it made me want to go on more camps

Click the link below to see some photo’s
https://1stbedworth.co.uk/features-and-notices/index.php?option=com_content&view=article&id=16&Itemid=95&album=true&photosetId=72157631711531302#album

In August our two Cub Packs were invited to visit Bedworth Fire Station as part of their Community Challenge Badge. The Cubs had an interesting & fun time and the Firefighters were great hosts. The following report was written by William who is a Cub on a Thursday Night.

On Thursday 16th August the Cubs and I went to  Bedworth Fire Station for our Community Badge. The Fire Fighters showed us the equipment and let us try the breathing apparatus. We went in the fire engine and the Fire Fighters showed us what was in the lockers on the machine. We squirted water out of the fire hoses and that was really good fun. We all ad a really good time and it was a very interesting night

Both Cubs pack visited the Old Meeting House and were treated to a fascinating  tour of the building  and a very interesting talk about the Meeting House and the history of Bedworth. Nicholas who is one of our Cubs wrote this report for us.

When I went to the Old Meeting House I heard about a person called Julius Saunders. He helped to  found the Old Meeting Church with  some other people called the Tops. The Topps made pipes for the organ and tin bottles  for the miners. The church is nearly 300 years old. It was built in 1726.

I also learned about the chained bibles. They were chained to stop people from robbing them. The bibles are really old, about 300 years. It was so amazing that I want to learn more about the Old Meeting Hall. The stairs to the balcony were quite scary with the swirly bit going around and around.

Thanks to Mrs Burton for telling us all about this & Akela Maxine for arranging the visit. The Old Meeting  also had a 100 years titanic expedition.  If you want to find out how did it get there and where it is search on line it may look like a normal church but it holds many many secrets

We joined forces with 1st Bulkington Scouts and held a Cub Cyclist Badge Activity Day. 1st Bulkington kindly hosted the event at their Scout Hut. All of the Cubs had a great time and past the badge.Two of our Cubs have kindly written a report about the day.

First of all we arrived at the Scout Hut in Bulkington to have our bikes checked. If our bike passed the test we went inside. Once everyone was inside ‘Chill’ explained bike rules and bike safety. Then we split into three groups , group one, group two & group three. We then got on with the activities. I was in group one and first we did puncture repairs. We learned to take the inner tube in and out. After that group one went inside to do loads of little quizzes and we had to know what to wear on a bike. The last quiz was easy you could just follow the words and fill them in. then we had lunch.

After lunch group one had a road bike route. We had to ride up the road then we had to turn into a car park. There we practised putting a hand off the bike and back on.. After that we had an off road task. We had to ride up and down a dirt track and it was fun. When we finished that the obstacle course was next. First of all we had to weave through cones, then ride straight through a rope, then make a figure of eight. We then rode in boxes and in the blue square or box we rang our bell, and then we had to ride back to Max.

On Saturday 10th May we went to 1st Buklkington  Scout Hut to get our Cycling badge. We learnt how to take a tyre off and how to fix a puncture. We learnt the hand signals and we went on a dirt track and it was really fun. We got to pump up a tyre and find a puncture in a bowl of water. We went round an obstacle course and that was lots of fun.

Scout Winter Camp 2011 was based at the Scout Hut from  Friday 2nd December to Sunday 4th December and was enjoyed by twenty three Scouts, four Young Leaders and five adults. We based the camp at the hut to keep costs down so the activity would be affordable to more Scouts.

On the Friday evening everyone was split into three teams and we enjoyed a couple of hours of games and competitions. After supper we watched a DVD on  big screen until we turned in to bed in the early hours of the morning.

On Saturday morning we had a fairly early start and some of us had a lot of difficulty in dragging ourselves out of our beds, perhaps we should have took Woody’s advice and got some sleep instead of larking around most of the night! After breakfast we were ready to head off for our day’s activities. Most of us headed off to Solihull Ice Rink in the minibus, as well Leigh’s & Meeky’s cars.  Three Scouts plus Jason & Woody headed for Think Tank in Birmingham. Both parties had a great time. The ice skaters enjoyed whizzing around on the ice, and though there was the odd tumble, everyone survived without injury. Think tank was great fun and we had a great time pushing loads of buttons and playing on the telephones in the kiddies village.

After Ice skating and Think Tank we enjoyed some shopping. Around tea time both parties met up by the Bull in the Bullring. We couldn’t climb onto the bull to have our photo took as he had just been fitted with a brand new Christmas Jumper. Bravely we headed off to explorer the nearby German Market. The crowds were horrendous and we spent ages trapped in the crowds unable to move in any direction, but having said that , it was still good fun and some of us succeeded in buying doughnuts !

We were late leaving Birmingham and we had to contact Jo back at the Scout hut to let her know we were late. Jo had kindly volunteered to go up to the Scout Hut and put the pizzas in the oven for us. When we returned to the Scout Hut after an  uneventful journey, there was a bonus! Jo had not only put the Pizzas into the oven , but she had also done the jacket potatoes and when we got back to the Scout Hut we were all able to sit down to a slap up feast prepared by Jo. We were all absolutely shattered after a busy day and we were  grateful to Jo that she had saved us from doing any cooking. After a  quiet couple of hours watching another DVD or just chillin’ with our mates we turned into bed a little earlier on the Saturday night. On Saturday we actually all got some sleep. We were just too tired to muck about.

Sunday morning soon came around and it was time to drag ourselves out of our sleeping bags again. Woody was his usual annoyingly cheerful self, how can anyone be that happy before the sun has even come up? After a hearty breakfast it was time to head off to Rough Close for a day’s worth of activities. For those of you who don’t know about Rough Close it is the Coventry Scout County’s own camp site near Tile Hill. On arrival at Rough Close we played a couple of wide games in the woods. The wide games were organised by Meeky & Leigh with the help of the Young Leaders and were really great fun. After the wide games we did some backwoods cooking, that is cooking on wood fires without any utensils. The Banana Dream Boats were very popular. To cook these we slit a banana and put in some chocolate and then cooked it on the embers in the fire-yummy. We also cooked eggs in orange skins and twists.

Another activity we did  while we were at Rough Close was archery in the Maclean Building. This was great fun and some of  us got quite good scores. After we finished the Archery and the Backwoods cooking we had another wide game before heading back to the Scout Hut. We were very lucky with the weather on Sunday, it was reasonably warm and there was hardly any rain which was great as we were outside most of the day. The day at Rough Close was organanised  by Andy M and we would like to thank him for a  great day. When we returned to the Scout Hut t was time to pick up our kit and head off home,, very tired but very happy after another fun weekend.

To close this report a few words by John who is one of our younger Scouts. Winter Camp is a fun filled weekend for everyone. This weekend was the best camp ever. I learned how to ice skate very fast. The new things,  learnt how to cook  on a fire, how to start a fire and how to use wood shavings to start it. Camping is one of the most fun things you can do and Winter Camp is by far the best camp”