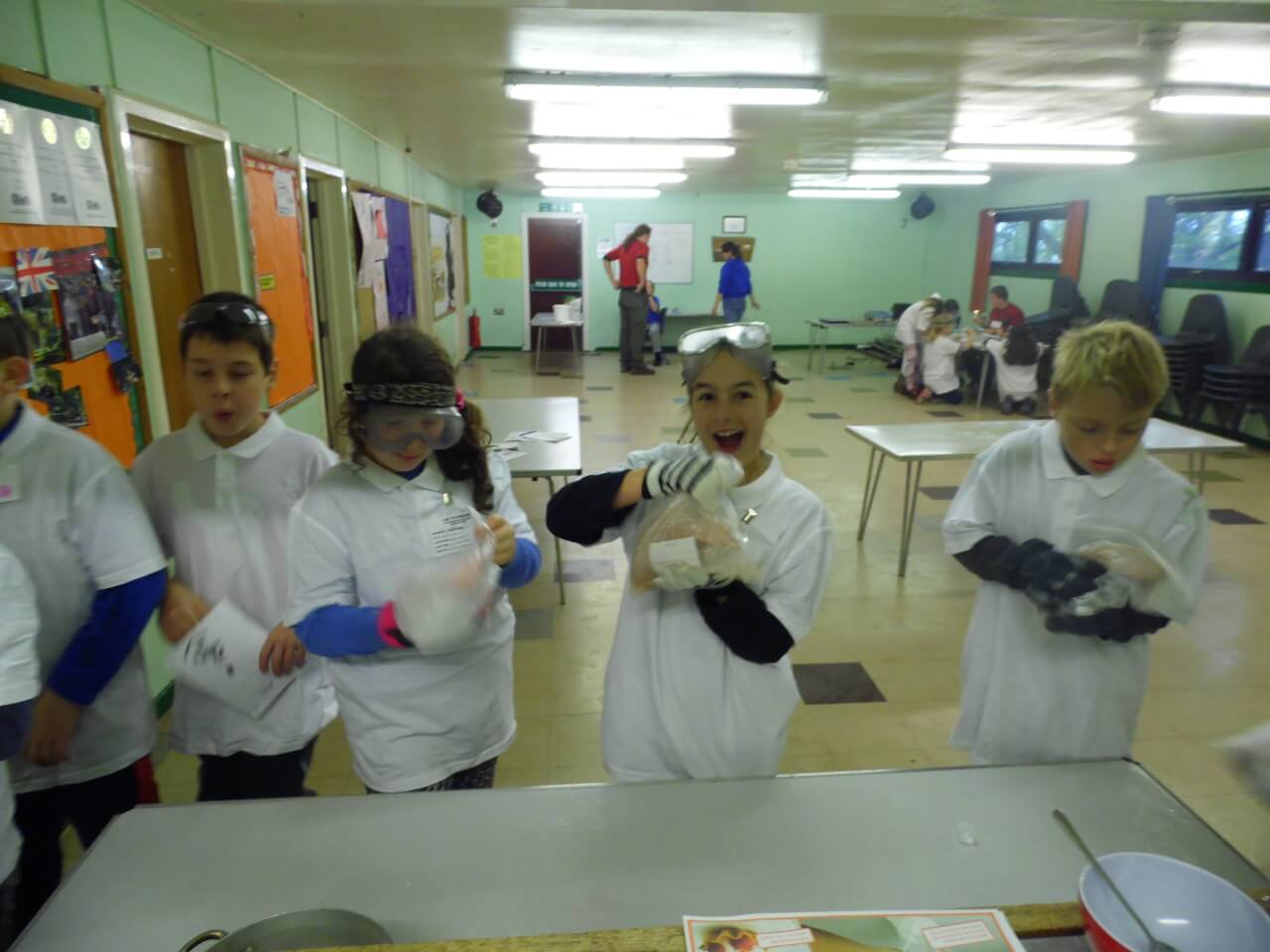 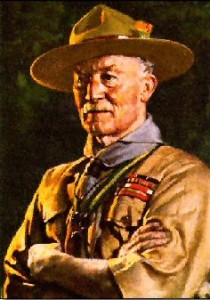 The Scout Movement was started by Robert Stevenson Smythe Baden-Powell (BP) who was born on 22nd February 1857. As a boy BP enjoyed pretending to be a hunter or an Indian Scout. BP attended Charterhouse School which had recently moved to the countryside. Next to the school there was a wood which was ‘out of bounds’ to all of the pupils. BP couldn’t resist the lure of these woods and spent many hours in them after slipping out of school. It was in these woods that BP learned how to hunt, stalk and cook rabbits on near smokeless fires. He learned how to avoid the teachers who used to patrol the woods. Often he would hide up in the trees to observe the teachers during their patrols. During the school holidays, with his older brothers, he often went on all sorts of expeditions. These expeditions were often on water and BP and his brothers bought old boats and used them to explore the coast of Great Britain. When they were not on the water they were learning to look after themselves by walking for miles with equipment and gear on their backs. It was at School and during the holiday expeditions that BP learned and developed the skills that would help him during his army career and would be the basis of his Scouting programme.

A picture of Captain Baden-Powell of the 13th Hussars

When he left school BP he wasn’t sure what career he wanted to follow. Whilst at Chaterhouse  BP had discovered a love of the stage and would have liked to have been an actor, but in those days the theatre was not seen as a suitable career for a person of his class.   BP decided that he would become an officer in the Army.In 1876 BP was commissioned as a Lieutenant in the 13th Hussars. He traveled a lot in India and South Africa. These were the days of the ‘red coats’ and large massed formations. BP could see the value in training soldiers to work in small groups. He taught some of his men map reading, tracking stalking and living off the land. When they had passed this training he gave them a badge in the shape of an arrowhead to wear on their uniforms. They were organised in groups of around six called ‘Patrols’ and their job was to ‘Scout’ ahead of the main army watching out for the enemy. He wrote a military training manual describing his methods of training called ‘Aids To Scouting’ .

In 1888, whilst fighting in South Africa, BP captured a local Zulu Chief and befriended him. Later this chief called Dinizulu, gave BP a long necklace of wooden beads as a token of their friendship. These beads are represented by the Wood Badge worn today by Scout Leaders who have completed their Leadership training. 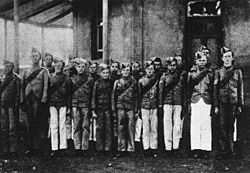 Mafeking Cadet Corps during the siege

In 1899, during the Boer War, BP was the commander of a garrison of Troops who defended a town called Mafeking, in South Africa. BP had fewer than 700 troops under his command whilst the town of Mafeking was surrounded and cut off by over 8,000 Boer Troops. BP used all of his cunning to hold out against the Boers. He planted dummy mines , had his men pretend to climb over non existent barbed wire , and used numerous other ruses to convince the Boers that he was far stronger than he really was. A large number of civilians were also trapped in the town. Among them were a number boys who were below fighting age being aged 11 to 13yrs old. BP formed these boys into the Mafeking Cadet Corps.  The Cadets duties were to act as lookouts and messengers. BP was impressed by the bravery and spirit of these boys who were often under fire.  After 217 days of siege help finally arrived. Back home in Great Britain news of BP s achievement became well known and BP was considered a National hero. BP was an ambitious officer and in 1900, at the age of 43, BP became the youngest Major General in the British Army.

When BP returned home to Great Britain he found that many boys had nothing else to do but get into mischief. BP remembered how the boys in Mafeking when organised had performed so well and so he decided to put into practice some of the ideas he had used in South Africa for the boys in Britain. He rewrote ‘Aid to Scouting’ as a boys training manual . He wanted to try out his ideas so in 1907 BP organised a camp for a group of 20 boys to Brownsea Island in Poole Harbour in Dorset. Here he taught the boys about exploring, camping, boating, stalking, life saving and many other things which Scouts still do today. Today this is considered as the first Scout Camp

The front cover of the first part of Scouting For Boys

Following the Brownsea Island Cam,p BP finished his rewrite of ‘Aids to Scouting’ and titled it “Scouting for Boys”. BP intended that this book should be used by existing organisations should as the Boys Brigade to improve their programme, However  BP was persuaded by a publisher to release the book in six parts. Part one was released in January 1908.  The next five parts of the book quickly followed at fortnightly intervals. So great was the impact of this book that by the time that Part 4 was due to be issued, the demand far exceeded the number of issues printed. These books were bought by thousands of boys all over the country who then formed themselves into Patrols and did many of the things they read about in BP s books. Before long, they found adults to help them and Scout Troops began to sprout up all over the country and also in other countries. 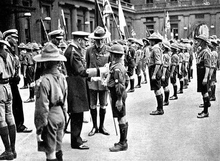 Scouts at the 1909 Crystal Palace Rally

The  Scout movement swiftly established itself throughout the British Empire soon after the publication of Scouting for Boys. Scouting spread to Gibraltar in 1908, followed quickly by Malta. Canada. Australia, New Zealand and South Africa.  Chile was the first country outside the British dominions to have Scouts. The first Scout rally, held in 1909 at The Crystal Palace in London, attracted 10,000 boys. At this rally BP spotted a number of girls dressed in Scout uniform. BP asked them what they were doing at the rally and they told him they wanted to be Scouts. BP intended for Scouts to be for boys only but he realised that he needed to do something for the girls . BP enlisted the help of his sister Agnes Baden-Powell and thus the Girl Guides were born. 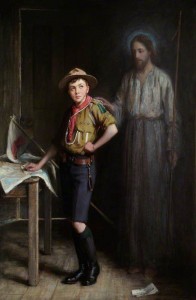 ‘The Pathfinder’ painted by Ernest Stafford Carlos in 1913. Ernest was the founder of the 21st Camberwell (Trinity) Scout Group. The picture shows a young Scout with the hand of Jesus on his shoulder. Ernest was killed in action during the Battle of Messines on 14 or 15 June 1917 .

By 1910, Argentina, Denmark, Finland, France, Germany, Greece, India, Malaya, Mexico, the Netherlands, Norway, Russia, Sweden, and the United States had Scouts.The growth of the Scout Movement had become so great that  B-P retired from the Army so that he could give more time to the organisation that he had inadvertently founded, and to develop of the  World Scout Movement.

As Scouting developed, the younger brothers of Scouts wanted join Scouts and in 1916 the Wolf Cubs (later to become the Cub Scouts)

Scouting continued to grow at a great pace and BP found himself traveling all over the world to attend rallies and to assist with the development of Scouting. At the 5th World Scout Jamboree in 1937, BP now aged 80 years old gave his farewell to Scouting, and retired from public life,

In his final letter to the Scouts, Baden-Powell wrote:

… I have had a most happy life and I want each one of you to have a happy life too. I believe that God put us in this jolly world to be happy and enjoy life. Happiness does not come from being rich, nor merely being successful in your career, nor by self-indulgence. One step towards happiness is to make yourself healthy and strong while you are a boy, so that you can be useful and so you can enjoy life when you are a man. Nature study will show you how full of beautiful and wonderful things God has made the world for you to enjoy. Be contented with what you have got and make the best of it. Look on the bright side of things instead of the gloomy one. But the real way to get happiness is by giving out happiness to other people. Try and leave this world a little better than you found it and when your turn comes to die, you can die happy in feeling that at any rate you have not wasted your time but have done your best. ‘Be Prepared’ in this way, to live happy and to die happy — stick to your Scout Promise always — even after you have ceased to be a boy — and God help you to do it.

In 1939, BP  moved to a cottage he had commissioned at Nyeri in Kenya, near Mount Kenya, The small one-room house, which he named Paxtu, was located on the grounds of the Outspan Hotel. Baden-Powell died on 8 January 1941 and is buried at St. Peter’s Cemetery in Nyeri. His gravestone bears a circle with a dot in the centre “ʘ”, which is the trail sign for “Going home”, or “I have gone home”. Kenya has declared Baden-Powell’s grave a national monument.

The world Scout Movement has continued to grow. There are now Scouts in 223 countries and territories around the world. With over 40 million members in some one million local community Scout Groups, The Scout Movement is the largest youth movement in the world.

‘Chief Scout of the World’ was a tile reserved for BP only, and since his death no-one else has held this title. Each  Country or group of countries now have their own ‘Chief Scout’.The United Kingdom has seen nine Chief Scouts since BP Died 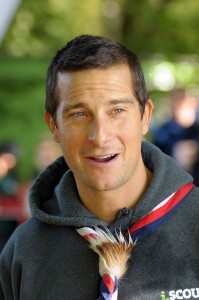 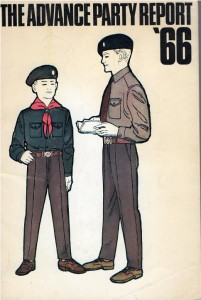 Cover of the Advanced Party Report.

Scouting continued to grow and develop in the U.K. after BP’s death. In 1966 the Chief Scout’s Advance Party Report was published. This heralded a major modernisation of the U.K, Scout movement. Among the changes was a new uniform and a new badge scheme, ‘Boy Scouts’ became ‘Scouts’  and ‘Wolf Cubs’ became ‘Cub Scouts’.

In 1976 girls were allowed to join Scouts for the first time when they were allowed to be part of the Venture Scout Section which at the time was the membership section for 16 to 20 year olds.

In 1990 girls were allowed to join Beavers, Cubs & Scouts for the first time

In 2007 Scouting Celebrated it’s 100th Birthday. The World Scout Jamboree was once more held in the UK at Hylands Park near Chelmsford. 40,000 Scouts from all over the world attended .